Eight hundred years ago, Xie Lian was the Crown Prince of the Xian Le kingdom. He was loved by his citizens and was considered the darling of the world, ascended to the Heavens at a young age. However, due to unfortunate circumstances, was quickly banished back to the mortal realm. Years later, he ascends again, only to be banished again a few minutes after his ascension.

Now, eight hundred years later, Xie Lian ascends to the Heavens for the third time as the laughing stock among all three realms. On his first task as a god thrice ascended, he meets a mysterious demon who rules the ghosts and terrifies the Heavens. Yet, unbeknownst to Xie Lian, this demon king has been paying attention to him for a very, very long time.

Before I talk about this donghua, I have to first take a breather. This series is giving me so many emotions, I just don’t know what to do with myself!!

To be fair though, I did read the entire novel from which the donghua is based on. So my take on this series can be said as a biased one. As I am already in love with the story and characters before jumping in. Hence this review will probably talk more on how I expect the story will be told versus how it really came out. 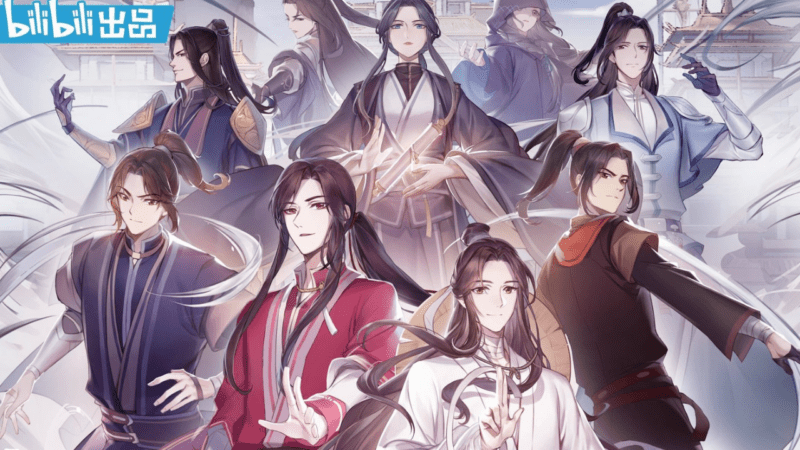 I’m never one who would actively be on the lookout for Boys Love stories, only for the simple reasoning that I don’t think I will be able to relate. But Mo Xiang Tong Xiu 墨香铜臭, the writer of the novel 天官赐福 Tiān guān cì fú, is brilliant.

She is able to reel in a 40 something heterosexual female such as myself. This character invested in the story and emotionally at a very intense level that I’m left with joy, sadness, hope, tenderness. Also lots of love after reading her work *wrapping myself with a fluffy, comfortable emo blanket. I guess by the end of the day, love is love.

If you notice the plot from IMDb for the series I pasted above, it talks about Xie Lian’s background on how he comes to be in his current situation. However, the series itself did not really elaborate on his identity and his past and current predicaments. His identity and controversy was only said in passing by the other heaven officials. Which if you blink you would miss it. The scene was pretty early on in the first episode.

Therefore, I would imagine if anyone watch this series without having any prior knowledge to the story. It would be difficult to get them to be engaged in the plot by his background alone. Nevertheless, the donghua depicts Xie Lian’s disposition well enough throughout the series. I cannot help but fall in love with him in the donghua as well.

His mind, heart, ideals, dreams of the world and not to mention charisma are definitely his biggest assets.

These cause for admiration, and jealousy, from many. He is my favourite character in this entire story.

How I Love The Donghua

The first season of this donghua talks about two arcs from the novel: Mount Yu Jun ghost bride arc and Ban Yue arc. Both arcs are very engaging and told well in the donghua. Which did its best to stay true to the novel, down to the small nerdy details. I hope this remains all the way through to the second season, because I truly love the book.

Another thing with the donghua is that I find the original novel to be well written. And most importantly to me, it is hillarious. Unfortunately, the series itself is not as hysterical as the novel. Most probably because the humor in the novel does not really translate well into the donghua. Unfortunate, yes, but not entirely disappointing.

The donghua itself is full of tender moments shared between the main characters and I am living for it. I guess this is where the donghua compensates for what it is lacking from the novel. They did not feel awkward or forced, but it feels like there are hidden and deeper meanings to them. This eeping us intrigued in what is actually the story behind the characters involved. If you read the novel, it is absolutely beautiful.

This donghua series is the first of its kind that I fall in love with. The drawings are very beautiful. From the start it gives you the feeling that you are going to watch something wonderful. Having said that, I’m not quite sure what it was, perhaps it is not animated enough to convey the hilarity in the dialogues. But this is something I am missing from the donghua.

The Music is Beautifully Written

It blends well with the scenes and sometimes it makes me feel like I’m in the middle of some calming RPG game. I say this in the best possible way (ᗒ ᗨᗕ) . But I have to say the most bewitching of them all is Hong Jue 红绝 sung by Hu Xia 胡夏 at the end of the last episode.

I feel gutted everytime I listen to this song. Also I have shared the link to a snipet of the song for you below. Big props to the song writer for also incorporating the title of the story into the song. You can imagine how I am a big fan of the donghua. By how I transform into such a trivia geek for it  (｀∀´)

Spoilers ahead from this point on….!

Focusing more into the donghua. It is understandable if it seems like there are many loose threads throughout the series. Such as; the little boy from Mount Yu Jun with the human face disease. The fate of the female ghost bride Xuan Ji, the how and why of Hua Cheng. And also including as to how does Nan Feng knows that Xie Lian’s cullinary skill is horrid?

He literally made a run for it when Xie Lian offered to cook him a meal. As it was later on revealed that Xie Lian cooked food for Hua Cheng in the form of something purple. To me, this is intriguing.

Xie Lian’s character shines in this first season as we can see his sensitivity and care towards others. I mean he even died an arguably fruitless death. Being trampled in the middle of battle between Ban Yue and Yong’an as he was trying to save a little girl. Yet his charisma left a deep impression on the little girl Ban Yue. She ultimately made the decision to work for Yong’an to stop the war and bloodshed with Ban Yue.

Essentially, carrying on ‘General Hua’s’ dream of saving the world. Xie Lian made a difference in people’s lives without him even realizing it.

The part where the following morning Hua Cheng left him with a painting of Xie Lian when he was still the crown prince of Xian Le. Brimming with his past glory and splendor, was the most bewildering moment in the donghua to me. No one knew who Xie Lian was anymore for the past hundreds of years. But yet this mysterious young boy who seem to just drifts along making use of his free time doing don’t know what, knows his true identity.

Xie Lian at this point is already a scrap immortal. Collecting trash for a living (and entertaining past time it seems). Very far from the magnificient crown prince that he was. This shows that, despite it all, this is how Hua Cheng sees him all this time. Exactly how he painted him in the picture.

It is not hard to imagine how Xie Lian might find Hua Cheng’s presence pleasant and favourable. He has spent 800 years wondering around alone with no one to share his joy and sorrow with. Even anyone who truly knows who he is, all would regard him with a hint of mockery or irony, except for Hua Cheng.

That’s why Xie Lian says in the last episode that only when Hua Cheng calls him ‘Crown Prince’. It feel like it was said with much reverence. I felt my eyes were watering at this point….. Over a donghua haha I feel touched and idiotic at the same time.

Another favourite scene of mine is when Nan Feng and Fu Yao were bickering with each other, and went all protective over Xie Lian in the face of Hua Cheng. They sound harsh and hostile but it was clear to see that they were just concern over Xie Lian. A beautiful friendship was about to be unfold in the donghua.

Overall, I think the donghua is wonderfully made and I hope I’m doing it justice in this review. I don’t want to reveal too much to the story but I cannot help to share the things I love about it. Even beyond the donghua series itself!

Spoilers for those who have watched the donghua but not yet read the novel….

I thoroughly enjoyed the novel, all 5 books of them. Cannot wait until the donghua comes to the part where Xie Lian met Qi Rong. I have to say, I truly enjoy the character Qi Rong. He is repulsive in the best of times and stomach turning in the worst of times, but by the end, he is truly endearing. It is hard to believe that in the end he died for Gu Zi, he basically died for love.

Who would have imagined someone like Qi Rong would have high level of fatherly instict! Only Mo Xiang Tong Xiu could come up with something like this (๑òᗜó). I’m a fan.

The Book is Really Something Very Special

Complicated and awe inspiring at the same time. Not only does it talk about love and devotion but also the intricacy of fate, free will and karma and how it works in the world created in Tian Guan Ci Fu. I cannot say I am of the same mind, concept wise, with what is being said on this topic. But I find the ideas very interesting, refreshing and worth my time to explore them further.

Another heart felt gem I’d like to share from the novel is how Xie Lian’s love and longing for his mother. This was the reason behind why he cooks so horribly later on in life. It was because his mother used to cook like that! In other words, he wants to taste his mother’s cooking again. This is the basic form of love from a child to a parent. I want to taste mother’s cooking, though it does not taste good for others, it tastes the best for me. It’s hilarious and heart breaking at the same time. How can someone be so talented as to write stories like this….

Xie Lian who was seen as saviour and the super hero by all. Challenged fate, he was confident that his compassion and empathy will bring him triumph. When he fell from grace, to a state which no one would even offer him a second glance. Hua Cheng became his pillar of strength and his greatest ally. It is a beautiful captivating story to say the least. Turns out conviction, empathy and a stubborn believer can win over fate….or does it…?

To quote Hua Cheng from the novel,

hua cheng: your royal highness the crown prince, to die for you in battle is my greatest honor

"From the start it gives you the feeling that you are going to watch something wonderful."Heaven Official's Blessing Drama Review