Hello readers, how are you? We meet again in the drama ending explained post. This time I wrote about Mr. Bad ending explained. Mr. Bad drama had a happy ending for  the main and side characters. So happy for them! I explained it to you the detail of it on this post.

Not forget to remind you, that I wrote Mr. Bad drama review. On that post you can read how I thought about this drama.

What Happened to Nan Xing and Xiao Wudi?

Xiao Wudi never realized that he was a novel character until he read Nan Xing’s novel. The reality shook him. He used to believe he was an ancient man who was time-traveled to the future. He had his own home, a master, and identity as the Young Master of Hehuan Palace. But now he questioned his existence.

Xiao Wudi was a mature person. Although the reality hurt him, he never blames Nan Xing for that. He only asked for two days out to sort out his feeling. Nan Xing tried so hard to help him with his identity crisis. She comforted him and give him many insights about the purpose of life.

Nan Xing made a surprise for Xiao Wudi. She arranged some kind of play for him. Nan Xing wanted to give Xiao Wudi childhood memories that he never had. He summoned him into a crib…😅 Yes, a baby crib. You didn’t read it wrong and I didn’t write it wrong too.

Nan Xing wanted Xiao Wudi to know how did it feel to be a baby (complete with a pacifier and an identity bracelet from the hospital).

Then they played to be students and took a picture of their graduation day. The last part is his 22nd birthday party. She let Xiao Wudi light the candle (she closed her eyes to avoid a panic attack) and make a wish. His wish was to live forever in the world where Nan Xing lives. But after they kissed passionately, he disappeared. Nan Xing cried when she realized that Xiao Wudi had returned to his world. 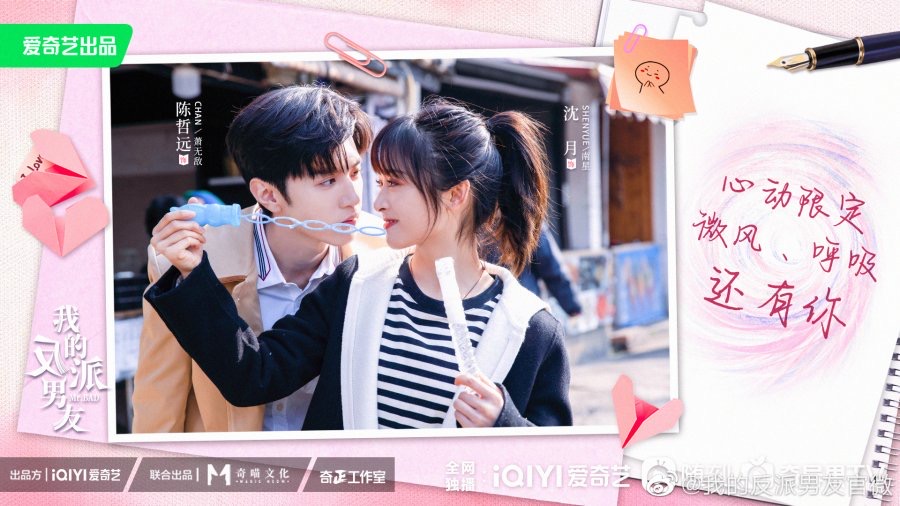 Nan Xing and Xiao Wudi might not be real, but their way of communicating their feelings and problems was good models for every relationship. Good job screenwriter!

Nan Xing had a busy life after Xiao Wudi disappeared. She helped Lu Zichen to manage the company. Meanwhile, Xiao Wudi realized that he no longer be a villain in her novel. In Nan Xing’s novel, he was a hero.

When she helped Lu Zichen with his work, suddenly a fire broke out at the office. Nan Xing saw the fire and had a panic attack. She was shaking, could not breathe, was crying, and could not do anything. She keeps calling Xiao Wudi to help her. Xiao Wudi felt her cries. He begged the fairy to let him return to Nan Xing and helped her.

The fairy gave him a mission to accomplish and a warning. There would be severe consequences if he returned to Nan Xing. Their relationship would be ended terribly, and he was the one who would suffer. Xiao Wudi was able to return to her and help her in time.

Nan Xing and Xiao Wudi use their time wisely. They spent a lot of time together. Nan Xing brought him to go the mountain and visit her father and Mao Xiaojun’s grave together with her mother. She introduced Xiao Wudi as her boyfriend.

Who is Mao Xiaojun?

Xiao Wudi always had a dream about Mao Xiaojun. It turned out, his mission was to heal Nan Xing’s panic attack by resolving the knot in her heart. Nan Xing always feel that she was the reason for Mao Xiaojun’s death. Xiao Wudi did exactly what Nan Xing had done for him. He recreated the scene when Nan Xing waiting for Mao Xiaojun before school. Xiao Wudi told Nan Xing that Mao Xiaojun always liked her, and her love was not unrequited.

Mao Xiaojun was just too shy to tell her. He also told her that Nan Xing should not be drawn into sorrow and guilt. Because if Mao Xiaojun did not save her back then, he would be the one who was devastated if she died. Xiao Wudi completed the mission and pass the test. The fairy grants him life in Nan Xing’s world.

And the plot twist was… Xiao Wudi was not created by Nan Xing. He was a character created by Mao Xiaojun to protect Nan Xing. The fairy had to grant his wish, he just didn’t have the chance to do that until Nan Xing wished for unforgettable love.

What Happened to Lu Zichen and Ye Qing?

Lu Zichen finally knows that Ye Qing had a secret agreement with his father. She managed to convince his father to invest in X-Culture. However, old Mr. Lu had a condition for her. Ye Qing should not date Lu Zichen, or else he would withdraw all the investment.

He said that because he wanted to scare her, but Ye Qing said yes without much consideration. She already knew that X-Culture was the most important thing for Lu Zichen, a romantic feeling could be cast aside for the greater good. As the consequence, she had to hold back her feeling for Lu Zichen.

They had to be apart for some time when Ye Qing decided to resign from the X-Culture following a dispute with Lu Zichen because she rejected his feelings. Ye Qing returned to her family and helped in their small food restaurant.

Lu Zichen was devastated when she was gone. Although Ye Qing had prepared and made sure that the company would run even though she was not there, it still hard for Lu Zichen to catch up. By then, he realized how immature he was back then. 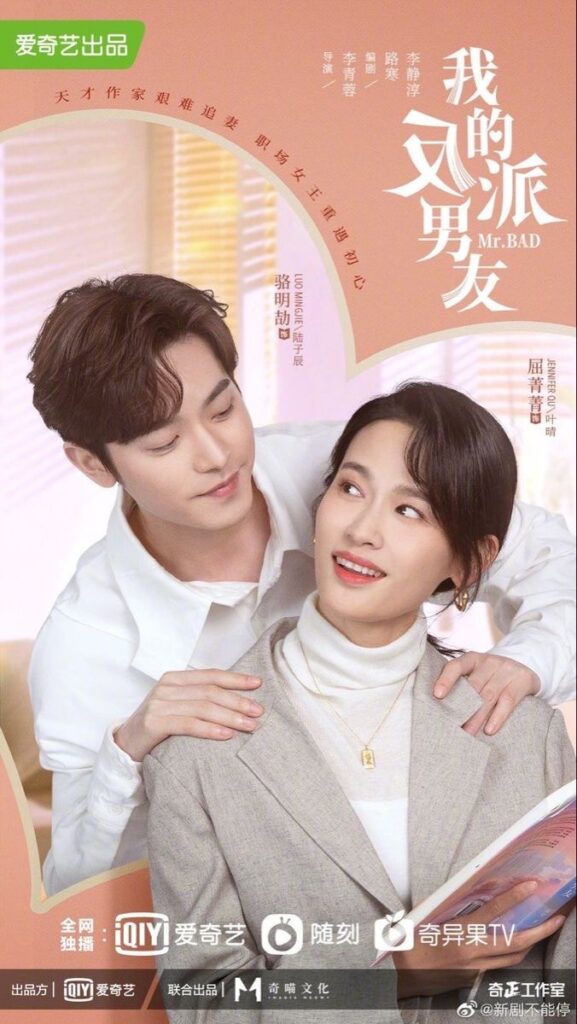 Lu Zichen decided to kick his father out of his business after he find out about the agreement. He tried to find new investors for his business. But a business partner’s words opened his mind. The business partner said that Lu Zichen should not kick his father out because by then, he had lost a backup that the investors sought by investing in X-Culture. Also, the investors were willing to join hands with his company, thanks to Ye Qing’s impeccable negotiation ability. They trusted her more than they trusted him.

Lu Zichen decided since he was able to fund his company, he would try that way. He sold his house to buy back the shares from his father. He lived in his office and tried hard to manage the company while still doing his job of writing the novel. But everything was a mess. He could not handle the business, and he stop writing because he could not write anything recently.

Nan Xing tried to be the bridge between them. She persuade his boss and also Ye Qing so they could be together again and managed the company, but her attempt was for naught. Lu Zichen thought that Ye Qing did not like to work at the company. Therefore he believed to let her free was the best option for her. And Ye Qing was hesitant to return to the company because Lu Zichen said she should not interfere with the company.

They finally had the chance to be together again after Lu Zichen offered the position of a full-time writer to Nan Xing. Nan Xing accepted the offer and left her position vacant. When she open the job interview, Ye Qing showed up and applied for it. Without further ado, Ye Qing was accepted to be Lu Zichen’s new assistant.

Lu Zichen still worried that Ye Qing was forced to return to X-Culture because she pitied him. However, Ye Qing reassured him that this is what she wanted to do. She wanted her life and job in X-Culture, and she also wanted him to be in her world. Ye Qing took the initiative to kiss the dumbstruck Lu Zichen. Finally, this powerful couple could be together forever.

Later, our couples lived blissful marriages. Nan Xing was married to Xiao Wudi and lived next door to her mother. They had a 4-year-old daughter name Xixi. Nan Xing continues to be a famous author and writes about her life with the hero, Xiao Wudi. She still works under X-Culture and managed to maintain a friendship with Lu Zichen and Ye Qing who were also married and has a daughter.

Well, at the end of this Mr. Band ending explained, I could write… And they live happily ever after…😆😆

Thank you for reading this ending explained. If you have any other thought about the ending, please let me know on the comment below. Have a nice day!