Autumn Fairy Tale is a Chinese romance movie, released in 2019. En Xi and Xin Ai have the misfortune to be switched at birth. They live an opposite life. En Xi was living a good life with good parents and a kind brother in a financially stable. While Xin Ai lives a hard life with a single mother who sells noodles for a living and a naughty brother.

When the truth was revealed, they switched back to their rightful life. Xin Ai with her family moved to USA and En Xi chose to live with her mother and brother.

It turns out, that even though the blood was connected En Xi and Xin Ai and their own family, the heart cannot lie. 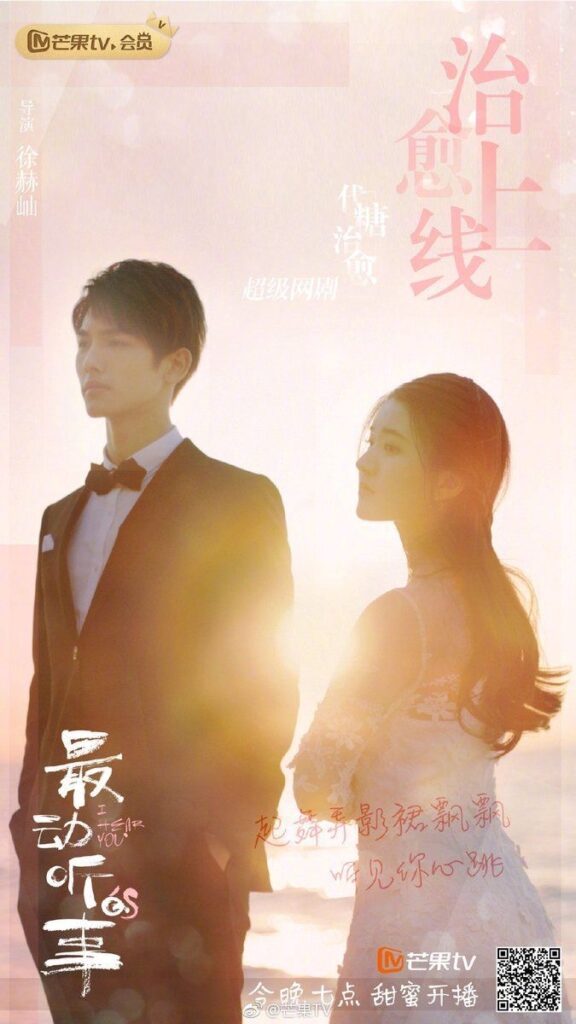 Autumn Fairy Tale gave me a sense of familiarity. I thought I saw this kind of story somewhere, but I could recall it.

Only after I write this review, did I know that Autumn Fairy Tale was a remake of the South Korean drama Autumn In My Heart, starred by my favorite Song Hye Kyo and the handsome Won Bin. But it was released back in the year 2000, no wonder I felt the familiarity but I could remember at all.

Good Drama But Lack On Story

The story is a heart-wrenching one but there are a lot of loopholes in the story. So I cried and I raised my eyebrow and I cried again.. That sort of arrangement happens all the time during the 1 hour and 44 minutes duration.

I won’t compare both because Autumn in My Heart is a 16-episode drama, while Autumn Fairy Tale is a movie. It won’t be fair to compare them, plus, I don’t remember Autumn In My Heart except it shares the same story with Autumn Fairy Tale.

If you have watched Autumn Fairy Tale, you will find there was a slightly different color tone in the movie. In the beginning, the scene was filled with a warm colored tone. Especially the birthday scene when our main lead En Xi (played by Zhao Lu Si) and Jun Xi (played by Jiao Rui) are having a warm family gathering. 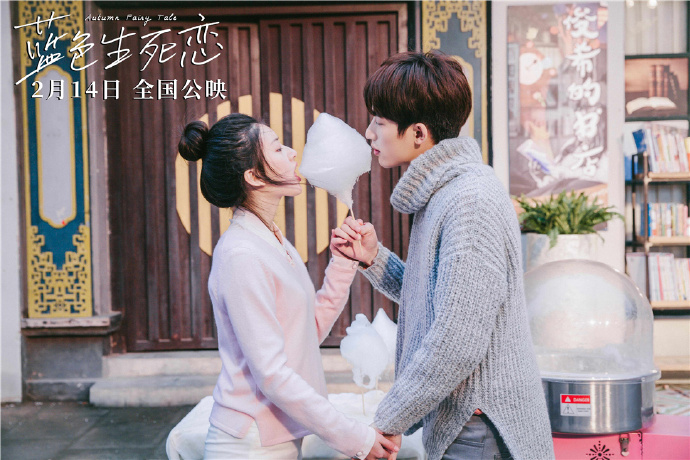 In the middle of the movie, the tone slightly changed into a darker color. This is the time when Jun Xi was looking for her. And at the end of the movie, it was filled with greyish color.

The colors were intended to guide us, the viewer, that the mood of the movie was dropped from happy to sad.

Because Autumn Fairy Tale was a movie, the story was short and fast-paced. But, I still have my brow raised sometimes. For example, Jun Xi and En Xi were not blood-related siblings, which means they have different appearances. They also had no communication for 10 years. However, they can recognize each other at first sight.

And there were no explanations for En Xi’s disease, except that it’s a hereditary disease and she needs a bone marrow transplantation. Plus, the place where she was treated doesn’t look like a ward at all. It is probably some kind of hotel because you can see a huge chandelier next to the bed. But, there was a possibility that it was a VVIP ward that looked like a hotel room.

Our main lead, Zhao Lu Si, and Jiao Rui’s chemistry might not be the best chemistry that I have ever seen. But, it was enough to make me feel the depressing atmosphere around them.

I like to see Zhao Lu Si act as En Xi when she’s doing her part-time job. The job wasn’t always good. She worked as a part-time nurse who had to attend to a perverted patient. The numb and cold face when she washed her hands showed the disgusting feeling that she had when she did the task. Lu Si was able to change her expression in just the nick of time. At first, you’ll see the disgust and then, in the next second, she changed into a happy expression when she talked to her friend. In an instant, you’ll know that she hides all her negative feelings and only shows the happy ones, lest everyone who loves her worry.

En Xi was a kind-natured person. She decided to stay with her mother in a harsh environment because she saw how sad her mother would be if she moved to the USA together with Xin Ai family. She keeps all her dreams just to take care of her mother. It was sad to see the lively En Xi change into a hopeless person when she was sick.

Xin Ai, on the contrary, because she had grown up in such an environment, became a bitter person. In this movie, Xin Ai was supposed to be the antagonist. The perfect opposite of En Xi. However, all I feel is a pity for her. She didn’t feel like she was accepted in her new family. She got everything that she always wished for; a financially stable and worry-free life. She was tired from working hard as a child. Her brother was a spoiled person and her mother vented her frustration with her. 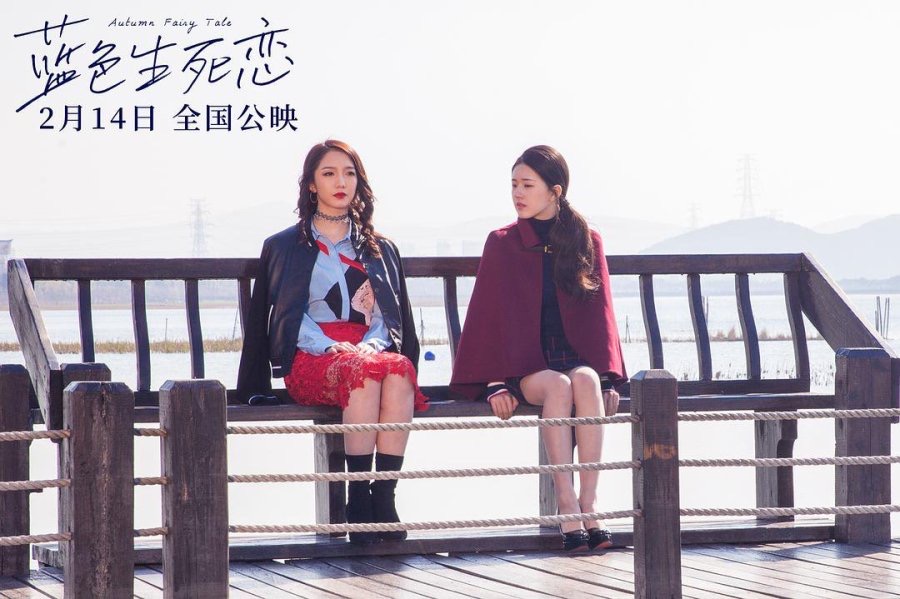 Even after she moved with her family, she didn’t feel loved. Her family secretly hides their yearning for En Xi. En Xi had become an unspoken existence that haunted her. She hated her, and it grew stronger after she learned that Hai Tai had fallen in love with En Xi. But, she cannot do anything about it.

She knows that she can’t change other people’s feelings. She longed to be loved. Therefore, her cry when she met En Xi’s mother was a heartbreaking one. Xin Ai resented En Xi’s mother because she was harsh to her, but deep down inside her, she loved and missed her. Meng Mei Qi really fit for the role. She carry some arrogant but pitiful appearances in this movie it makes me feel sad for her. Great job girl!

Jiao Rui has done quite a good job as Jun Xi. It was sad to see his complicated yearn/heartbreak/sad/regret expression when he met En Xi. Jun Xi is a very good brother. He took care of En Xi when they were a child. Even after the swap accident was revealed, Jun Xi still thinks on behalf of her. It was revealed then that the family was still thinking about En Xi. They still send letters to her.

En Xi’s mother burned all the letters and purposely moved their house to prevent Jun Xi and his family from looking for En Xi. She was afraid that they would take her away. Jun Xi still kept the CD player, one which was identical to En Xi’s CD player. Jun Xi’s role supposed to be the most important person for En Xi. But in my opinion, it was Han Tai who made the biggest sacrifice for her.

That’s why my heart goes to Han Tai. The playboy with a Lamborghini car and good hair 😆. Xu Kai fits perfectly for this role. Even though this movie was his big-screen debut, Xu Kai did a pretty good job. Han Tai is a playboy through and through. He was handsome, famous, and filthy rich. At first, he was curious about En Xi. 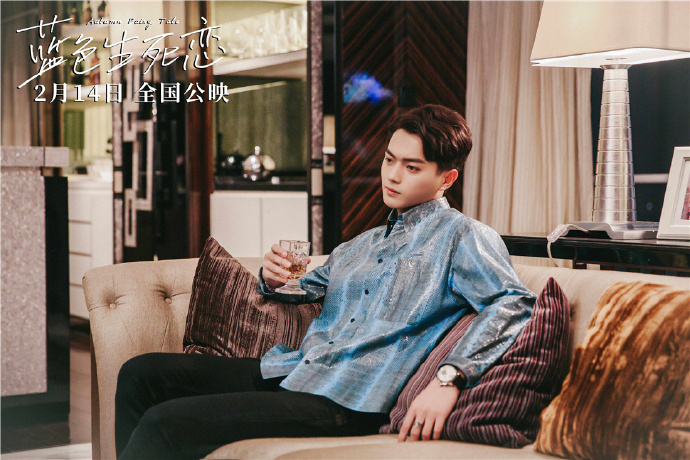 But later, we can see that he fell for her because he was sincere when he wanted to help En Xi. Personally, I choose him to be En Xi’s significant other. They looked more comfortable around each other compared to the time when En Xi was with Jun Xi. The most heartbreaking moment for me was when Han Tai asked En Xi to marry him. But when she rejected him, he still walked her through the aisle. Such a good friend and a big-hearted person… 😭 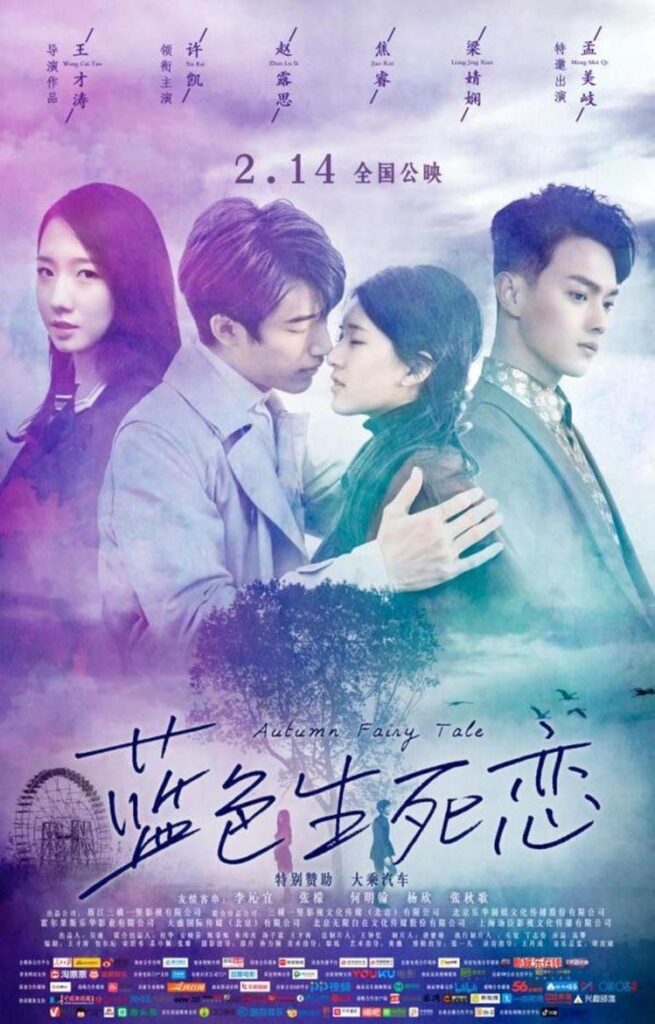 Some of Autumn Fairy Tale Story

Autumn Fairy Tale really knows how to create a story that made us, the viewer, cry our hearts out. The stark differences between En Xi and Xin Ai’s lives were enough to make us think that life is never fair. I thought, in a story like this, En Xi would be the one with a bad temper. She was forced to leave a comfortable place and start over in a harsh environment.

But no. She was the one who strived hard to make a living. She works multiple jobs and must face hardships in every job that she takes. As a nurse she must face a perverted patient. As a hostess, she met all kinds of playboys. And as a real estate agent, she must become a sly person just to secure the deal. On the top of that, she still keeps her optimistic mask in front of others.

The story didn’t tell much about Xin Ai. Especially, when she and her family moved to the USA. But looking at her fiery temper, she might not have a good life. Her brother was impartial to En Xi and her parents were also still thinking about her. She might have been living a lonely life. And when she fell in love with Han Tai, it turned out he also had fallen in love with En Xi. 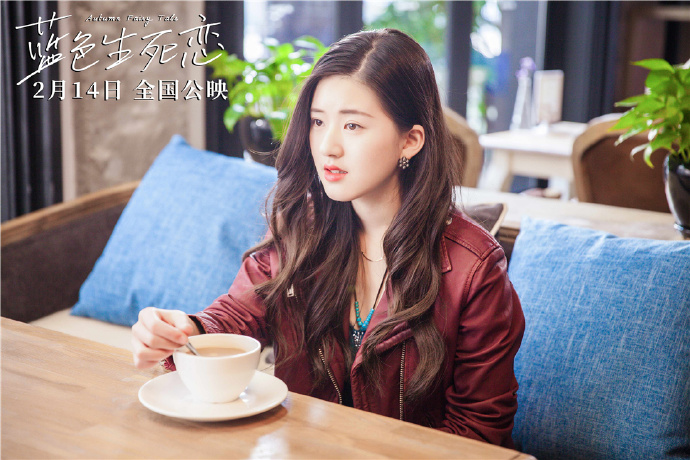 Xin Ai and her temper might be the antagonist. But her situation makes me feel pity for her. The swapping accident was not the children’s fault. But the adult should realize that the accident impact was harder for the children than for them.

There was another thing that I didn’t understand. Why is it when Jun Xi, who was already a grown-up man, went back to China to find his so-called sister, En Xi, he didn’t have the demeanor of a brother looking for a sister? It was more like an estranged lover. His feelings were so strong that it quickly changed from a familial love into a romantic love. 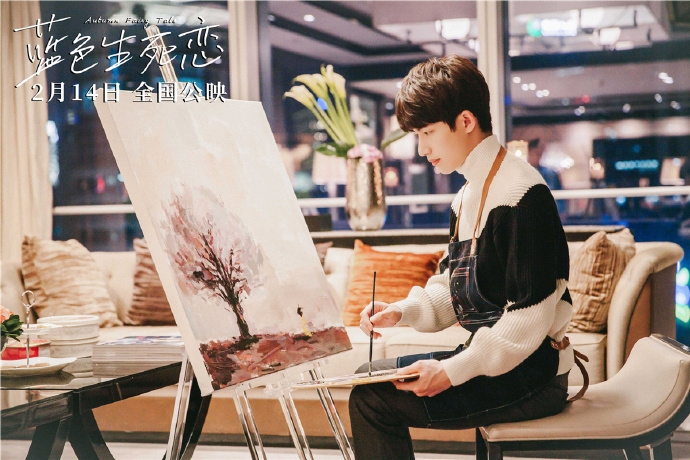 But in my opinion, maybe he already loved her a very long time ago because Jun Xi had prepared well decorated storage room filled with goods that he collected for her over the years.

I have to admit, I had a slight goosebump on this scene… it looks like Jun Xi was obsessed with En Xi 🙃. Plus the storage room was made from used shipping containers and it was stationed at a pier. Mr. Director, why does it have to be made from a shipping container? It didn’t look convenient at all. Probably, just for some aesthetic reason? 🤷‍♀️

The story reaches a climax when everybody finds out that En Xi was terminally ill. She inherited the disease from her parents, but she kept it a secret and continued to work multiple jobs to earn money. After a series of breakdowns, En Xi collapses at a nightclub where she works as a club hostess. Soon after, her condition declined. At the end of the movie, she finally found her happiness before passing away.

En Xi was the center of this story, because her life changed so many people who connected to her. Even when she is sick, it becomes a blessing in disguise. She brought the two families together and poor Xin Ai finally found her peace.

As always, my gentle heart cannot take such sadness. I was crying my eyes out when I watched this movie. It was a bittersweet story. Autumn Fairy Tale might have some loopholes, but it won’t keep you from sobbing. En Xi’s life is hard, but she works so hard because she loves her mother and doesn’t want to see her suffer. And as compensation, everybody around her loves her too.

If you need a good cry, for whatever reason, you might need this movie. No need for popcorn or drinks, just keep a bunch of tissues near you. Happy watching!

Iya Moyya
"I contemplate everything, everyday"

Let's discuss movies and books together! Every few weeks, my blog followers and I organize an online meeting to talk about our favorite shows, films, and even books or video games. Join us and be notified when these events happen!