A struggling screenwriter discovers his lucrative ability to bring antiques from his dreams into the real world — but his new life soon unravels.

I was minding my own business flipping through Netflix when I saw Darren Wang’s face on one of the movie recommendations. He has always been one of those actors with a striking face, but what sold me the most to the movie was the plot description on Netflix. I mean I know I was going to have a good time. Glad to report I was right!

To be honest, I can’t say I have watched religiously anything with Darren Wang in it, not any of his movies nor dramas. I almost watched The Wolf, but then I didn’t. It seems I have been missing out because he acted really good in this one and carried the movie well.

The special effects were also terrific. But if anything could be said in this area, the make up department could be better. There were scenes where he was not convincing enough as someone who has been sleeping rough, exposed to the elements, for sometime, though acting wise he was spot on. But apart from this small detail, which actually bothers me, he performed really well.

The flow of the story was also very enjoyable. The director Zhang Chong knows how to tell a good, inexplicable, gripping story in a simple manner. While throwing in some dark humor there as well. I thoroughly enjoyed it and I think I laughed at appropriate parts of the movie too.

They also throw in a nice slice of romance in there, for good measure, which I think adds to the enjoyment of the movie. But personally I think the bit that creates the most buzz, is the ending. I have seen lengthy posts dedicated solely to decipher the ending by viewers. And I personally have my own take on it later on in this post (≧▽≦)

Overall, I definitely recommend this movie to anyone and it is definitely one of the top Chinese movie choices I would revisit for a good time.

From the start, the movie jumped straight into the story without adding any extra fluff. Which I sometimes feel are added into movies to give an artsy feel. I am never a fan of those fluffs. So I appreciate this movie that went straight into the story like that. The story began by showing the horrible life phase that the lead character Sang Yu was in. He was having writer’s block, he has not submitted any work for a long time, and he was way behind rent.

As it turned out the source of all his troubles came down to the haunting nightmares of a demon on the hunt for his blood. That terrorized him as he sleeps at night or whenever he takes simple naps. Reminds me a lot of A Nightmare on Elm Street, don’t you think?

Therefore, he has not had a good sleep or any rest for that matter, for a long long time. Understandably, he became irritated, exhausted, unable to concentrate to do any writing and whole list of other mental and physical problems. I cannot stress this enough; beauty sleep is important!

Anyway, I like how all his current distress were being told early in the movie without getting too much narrative. Especially when an unknown someone was knocking on the door of his dilapidated apartment. And as he was about to leave, he heard Sang Yu coughing. Apparently he was choking on his cigarette bud water, and immediately it was revealed that the uncle who was knocking earlier was the landlord demanding his rent money (^○^). Poor Sang Yu had to make a run for it. Which then brings me to one of my favorite scenes in this movie. 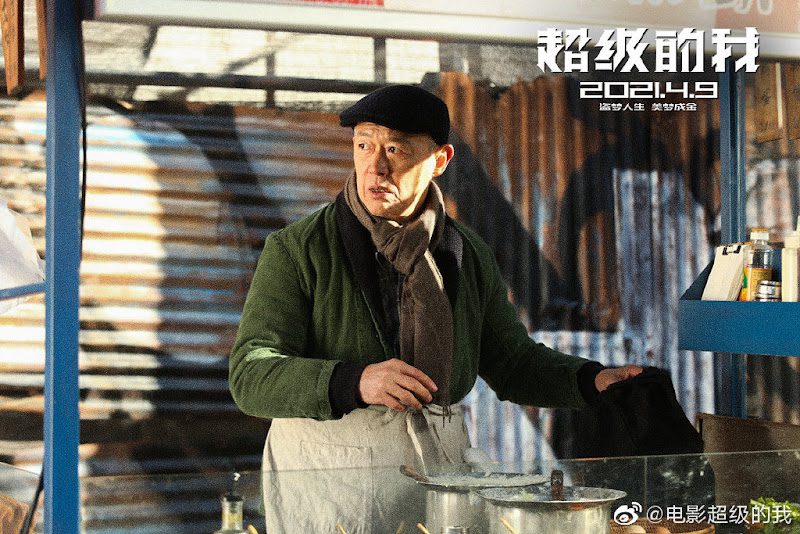 Though life is hard and sometimes cruel. There are always blessings and help around you, if you care enough to see. I have always believed in this. The part where the jian bing vendor gave him egg even when he does not want egg in his jian bing. Most likely because he has no money to pay for it, oww I felt that. That’s a good scene, not to mention realistic because I have seen and experienced something similar.

Sang Yu experienced his lowest moment when his laptop was stolen. His only device to get his life back on track, his only weapon as a writer, and his only thread of hope of a purpose in his life. This hits hard, the emotion was perfectly conveyed. This is the moment where I made a promise to myself to start paying attention to Darren Wang’s future work (^^)v 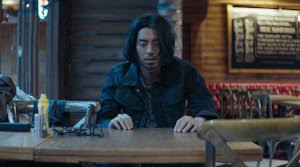 The best scene in the entire movie, I have to say was when he was about to kill himself jumping off a building. Then the jian bing vendor offered him a wrap with sausage and egg in it, a heart breaking and sweet scene. But this scene which I thought should be devastating. Took a turn into some dark comedy which made me laugh and relieved at the same time.

This is why this scene is the best, it shows the talent of the director and the actor. The way the scene flowed and the expression on Sang Yu’s face seemed to say ‘I made the decision to kill myself, but I haven’t eaten in several days so might as well eat first, plus this one has sausage and egg in it.’ This scene gave me a good laugh.

What so hard about life that you want to kill yourself? If your nightmare is bothering you, then just say this is just a dream and wake yourself up. Essentially this was what the Jian Bing vendor said, which I think is brilliant. Because life is precious, and as long as you have your life, there is still hope. I am happy that this scene and the dialogue was there. It was only a moment but the meaning behind it goes deep, I think. It’s a scene that carries hope.

At first I thought this movie is about schizophrenia, especially with the narration in the beginning. But it was also talking about the human brain and how we only use 15% of our potential. I had a feeling I had to pay special attention to this part because from the smell of things, the plot will be hidden in these narration. As such, I think my conclusion to what the ending means also depends heavily on what was being said in the narration about the human brain. 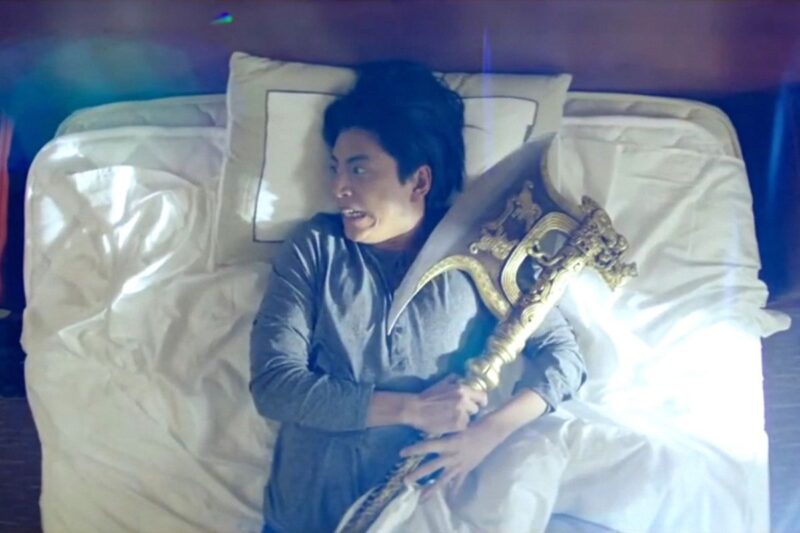 When Sang Yu started to bring back all these antiques from his dream, I thought this was another dark comedy element which I really enjoy. I mean ever since he figured out his unique ability and how this can lead to improvement in his financials. Sang Yu who has been avoiding sleep all this time. Even took sleeping pills to make himself sleep and basically ‘go to work.’ Who knew that money was the courage he needed all along to overcome his debilitating problem and face his demons.

The romance part of the movie (because all movies must have romance element to lift it up a notch haha) was portrayed sweetly. Though in real life, with Sang Yu’s stalking habit, this is more terrifying than sweet. But since he is the protagonist of the movie, we have decided that it is charming pffftt.

That being said, I thought the Hua Er character was only like the token girl in this movie. Which is unfortunate, because she can be portrayed better and more in depth. It seems that she has many layers to her, with her insinuating of a sad and broken past. But I just did not feel her come through as she was supposed to. Not sure I know why this is so, but this is what I’m getting, or not getting…. 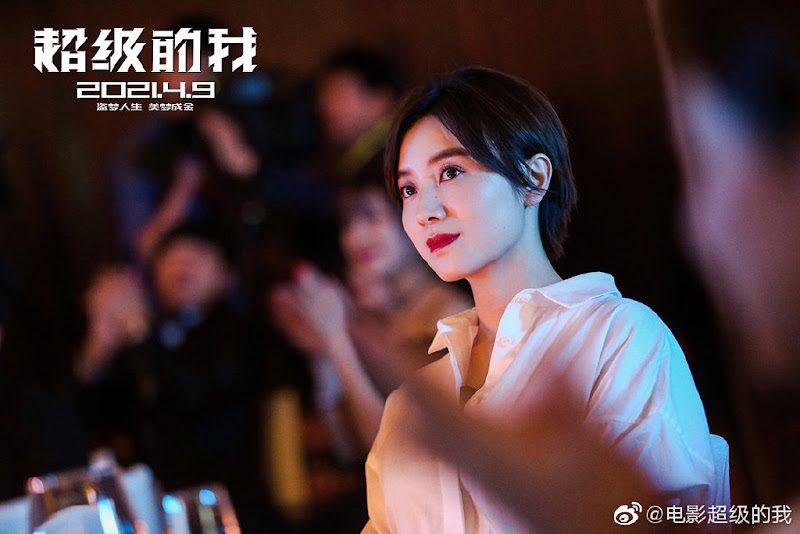 If there’s any character that was surprising to me, it was San Ge. When he was still the editor for Sang Yu, it did not seem like he was a good friend but more of an opportunist. Who would have thought that in the end, he was willing to lay down his life for Sang Yu. I did not know he had it in him, that was definitely a refreshing turn. 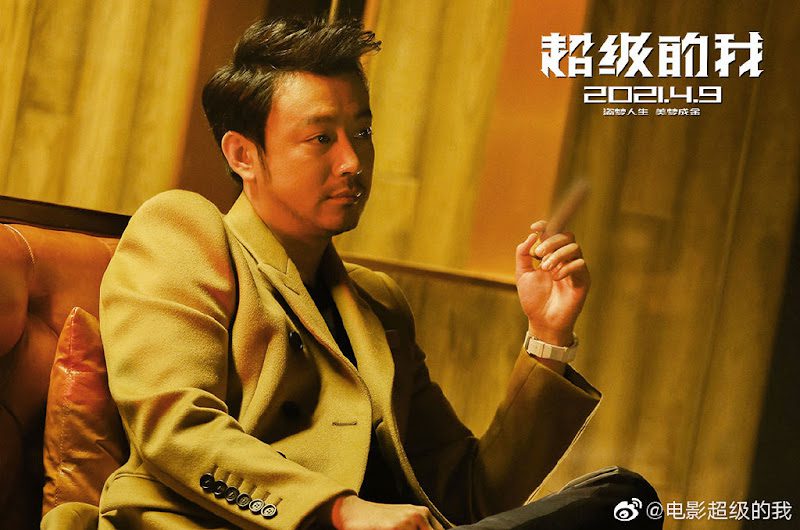 As for the much talked about ending, there were several things throughout the movie that seemed foreboding to me. First, there was this narration about how we are not fully utilizing our human brain’s potential. Then there was this frown on the jian bing vendor’s face when he received the bag of money. I mean he did not even supposed to know who the money was from. But he seemed to know very well and he was agitated by it.

Then there was this talk from Sang Yu as to how inventors in the world are only discoverers. Who have discovered a portal to another world where they took back all the so called ‘inventions’ and made it their own in their world. Lastly, there was Hua Er who said through the telecom at the condo lobby asking Sang Yu. Whether the reason why he approached her all this time was because of some regret in the past. I mean, what is that all about? 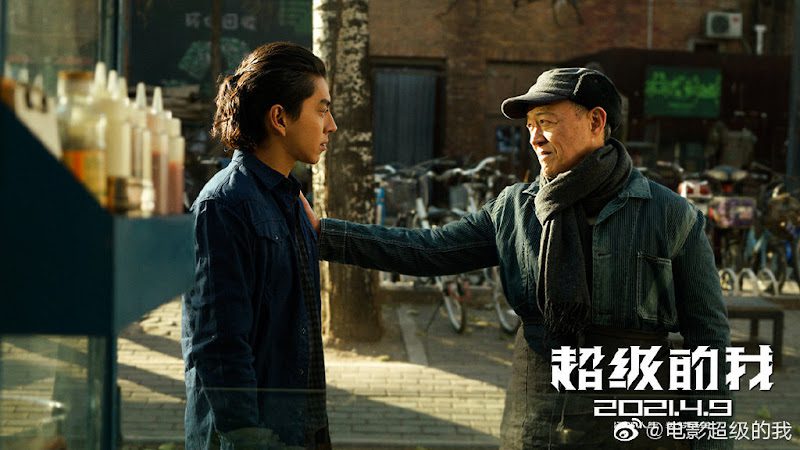 They were weird dialogues but to me it is how I come to my own understanding about the ending. When Sang Yu was given back the bag of money by the jian bing vendor, he then realizes he was still in that other worldly cave. Therefore, I think all this time he was just living in another reality, he lives on in those other realities.

This is my understanding based on how when he was dying and his consciousness was thrown into that cave. He was shown different outcomes of himself through those doors; there was one where he died jumping off the building. One where he died in front of the convenient store, and one where he was on the train, probably dead there too.

So my take is that once he is dead in one reality, he cannot go back to that world. Unless he smashed through it in the form of that blue demon. Hence, in the reality where San Ge, Hua Er and himself were killed. He lived another reality where Hua Er woke him up awake in front of the convenient store, and he lived happily ever after in that reality. Until maybe there comes a time where he won’t anymore… I don’t know, my guess maybe way way off. But this is just my understanding of it.

Another point why I think this way is because of the character’s name Sang Yu 桑榆 which can also be a metaphor for old age. Which I take it to mean that Sang Yu may have been living in alternate realities for a very long time. Perhaps in search of his ‘balance’, his happy ending. Whereas the jian bing vendor, who seemed to have the same ability, has found his balance by being a jian bing vendor.

If my guess were correct, then this movie is deeper than how it seems on the surface. Finding a balance is life is the art of living. It is elusive and I don’t know if it can ever be found. But it certainly is worth our entire lives to give it a try.

Well, that was my take on it. Please give this movie a try if you haven’t. But if you have, please let me know what do you think the ending means (◦’⌣’◦)

Let's discuss movies and books together! Every few weeks, my blog followers and I organize an online meeting to talk about our favorite shows, films, and even books or video games. Join us and be notified when these events happen!