The Moon Brightens For You Drama Review

The Moon Brightens For You Synopsis

The Moon Brightens For You is a Chinese wuxia drama released in 2020, with 36 total episodes. The story is around Zhan Qing Hong, quirky and out of the ordinary, dreams of becoming the greatest martial arts master. Overflowing with confidence, and also innocence, she embarks on her journey to make her dream a reality.

Along the way, she encounters into Lin Fang, a sickly aristocrat well known for his beauty and charm. However behind this well known persona, Lin Fang turns out to be a highly intelligent, resourceful and capable young man. Together, they make the unlikely team that would bring about change to the treacherous martial arts world which currently devoid of righteousness and honor.

The Moon Brightens For You Review

This is a wonderful wuxia drama that has ample amount of lovey-dovey scenes, the proportion of it is just right. At first glance, the character Zhan Qing Hong may come across as off-putting, and would probably cause you to not give this Cdrama a chance. But believe me, there is reward in perseverance in this case, the 36 episodes drama is a delight. The plot is engaging, the fighting scenes are thrilling and stories surrounding the main characters and side characters are exciting to follow. 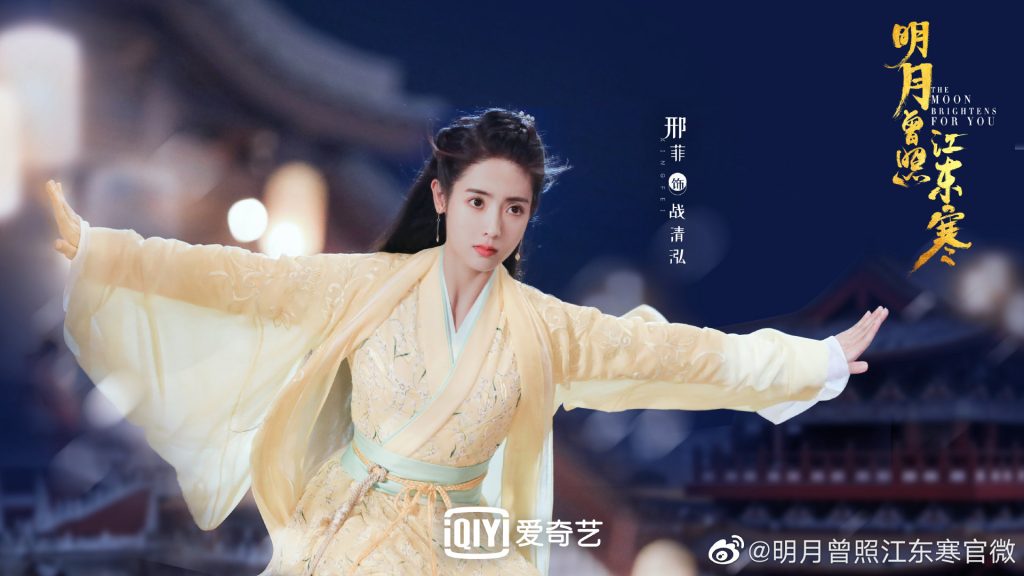 There’s not many wuxia drama out there that tells the story of a female heroine conquering the world with a male lead with zero fighting skill by her side. At least, other than The Legend of White Snake (this one does not even have the same plot) and this drama, nothing else comes to mind. To me, this is one of the most exciting parts about this Chinese drama; seeing Zhan Qing Hong grows from this wide-eyed, naïve, country bumpkin that she was to this confident, powerful, universally revered heroine throughout the land.

When Zhan Qing Hong first came on screen, I found her character a tad bit much.

She seemed so in your face, unsophisticated, impulsive, simple and gullible. I suffered many second hand embarrassments due to her antiques. A small town big shot, confident in her skill, going to the big city to make a name for herself.

This ambition already sets her apart from all her peers. Young ladies her age tend to strive for getting a good marriage. That has been their aim in life for as long as they can remember.

Thus, this was the layout of the story! On her quest to achieve greatness, she meets Lin Fang, an unlikely character who turns out to be a perfect partner for her in achieving her goal. How their story came to be is what sold this drama for me.

I enjoyed Xing Fei’s performance, specifically her literally wide eyed Bambi expressions. They were adding humor to unfortunate situations. Throughout the series, her character grew and became more mature as befitting of the events in her life. Seeing her transformed was a treat; I cried and laughed together with her character. 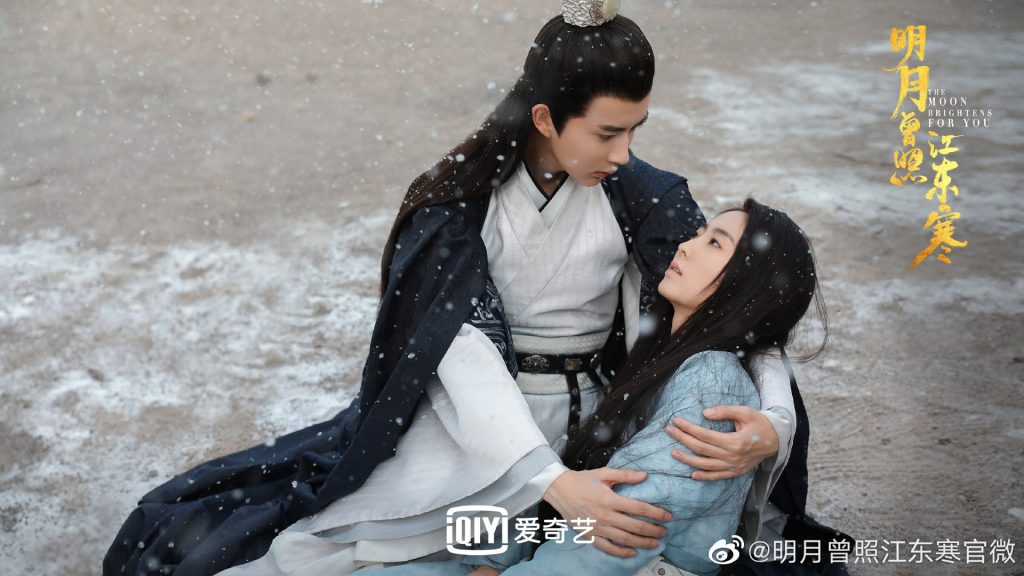 Watch out for spoilers….

My most memorable performance of hers was when she was devastated and mourned the loss of her family. Another was when she realized her love for Wen You had to end. Both momentous times, Lin Fang was there and became her pillar of strength. This is the charm of the story that stays with me.

Lin Fang the Sidekick, the Brain of the Operation 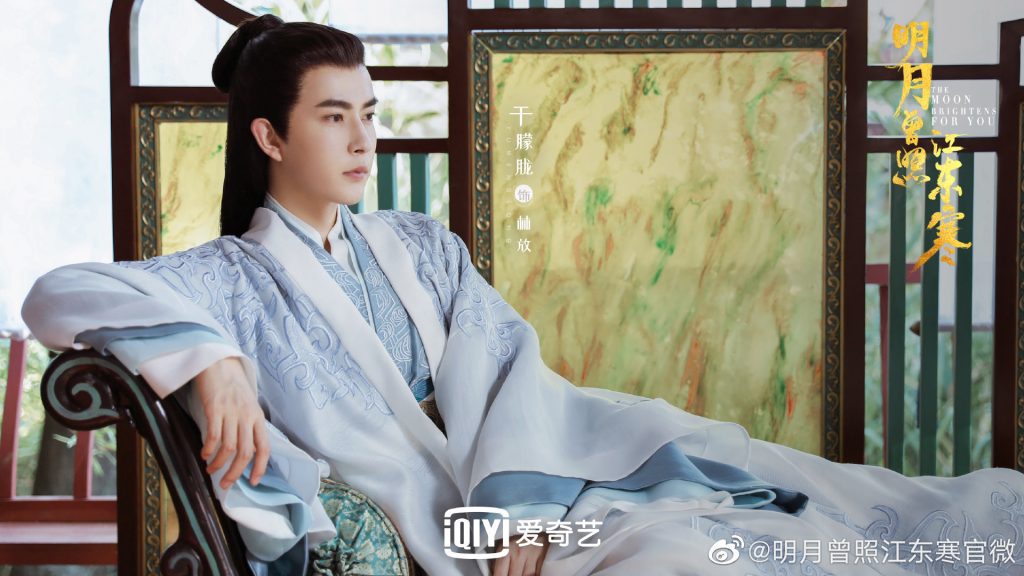 Yu Meng Long was his ravishing self in this drama. The character Lin Fang cannot be portrayed more perfectly. Lin Fang is intelligent, ingenious, steadfast and very dependable. Though the public persona he maintains is of that of a playboy, not lacking female admirers anywhere. Lin Fang has a personal vendetta against a well known figure in the martial arts world. Hence, with his own agenda to fill, he agrees to work together with Zhan Qing Hong.

Personally, I have never seen a hero in any Cdrama quite like him.

He has no fighting capability, oozes gentleness and sweet disposition, but believable as the hero and capture the heart of the audience. This role was one of the roles which highlighted Yu Meng Long’s career! I have to admit that I was also mesmerized by his charm as Lin Fang. 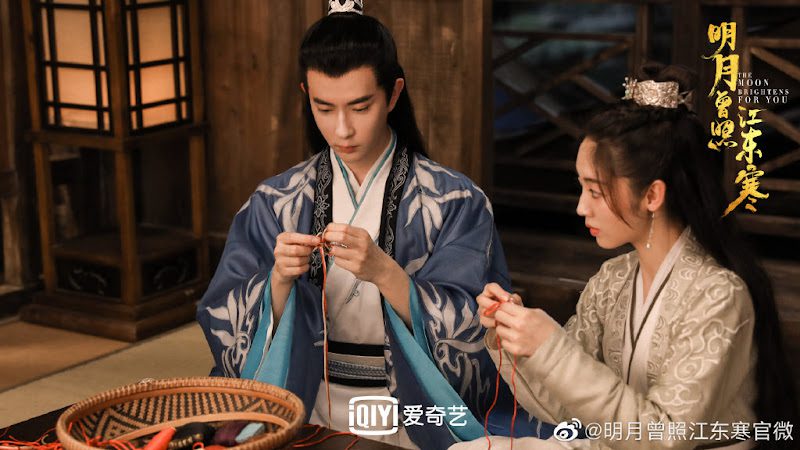 He may seem delicate, tender and docile, but there was no denying what he is capable of. Even with no fighting ability, he is able to become the leader in the martial arts world! That is saying a lot of who he is. As such, I cannot help but to root for him as the problem solver in every single critical moment in Zhan Qing Hong’s life.

Perhaps it can be said that if Qing Hong is the brawn, then Lin Fang is the brain in this unshakeable duo (hahahaha poor Qing Hong).

As much as it was wonderful to see Yu Meng Long as Lin Fang, he is type casted to play similar roles. I wish to see him more in a masculine role, I think it will be interesting.

The romance aspect of this drama is certainly addictive. How their relationship blooms from friendship to love is fascinating to watch, and I live for every minute of their lovey-dovey moments together. 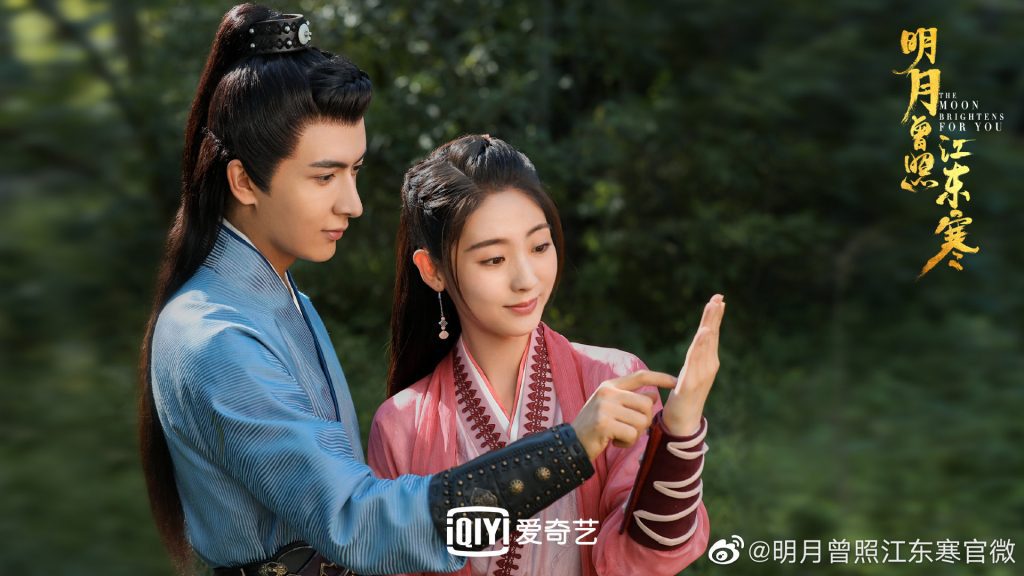 Wen You played by Merxat, who is portrayed as a character who seems to be a perfect fit for Zhan Qing Hong. They had the proper meet cute, hilarious way to get to know one another, and an exciting story development which grew into a romantical relationship.

Every bit the common recipe for the main couple of the show to come together, especially in Chinese dramas. Whereas Zhan Qing Hong’s bond with Lin Fang had been smooth from the start, which actually is the perfect formula to create the second male lead! 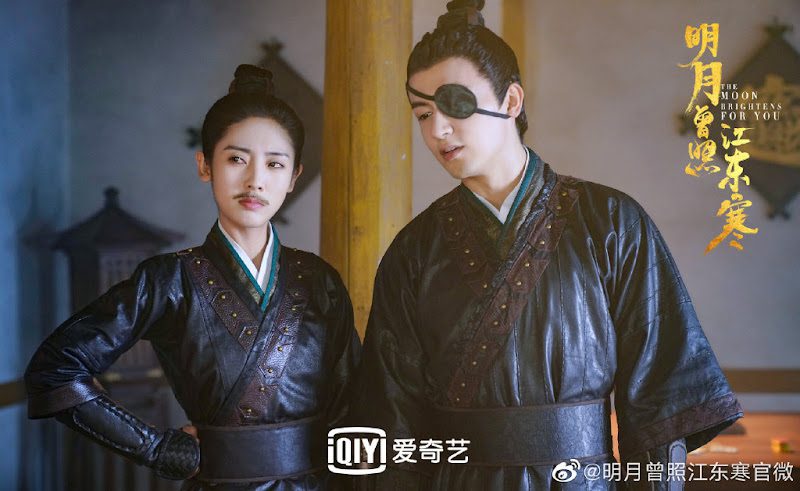 Wen You is strikingly handsome, talented in martial arts, ambitious and bold.

In so many ways, similar to Qin Hong. His outstanding martial arts skill was what brought him closer to Qing Hong in the beginning, while Lin Fang looked on helplessly (• ε •).

Their relationship was going fabulous when suddenly Wen You made a decision that would change everyone’s life. He decided to marry Hua Yao, to whom he has been betrothed since young. I mean…..whaaaattttt……? Why was he with Qing Hong in the first place?! (my uncomplicated mind judges him so hard). 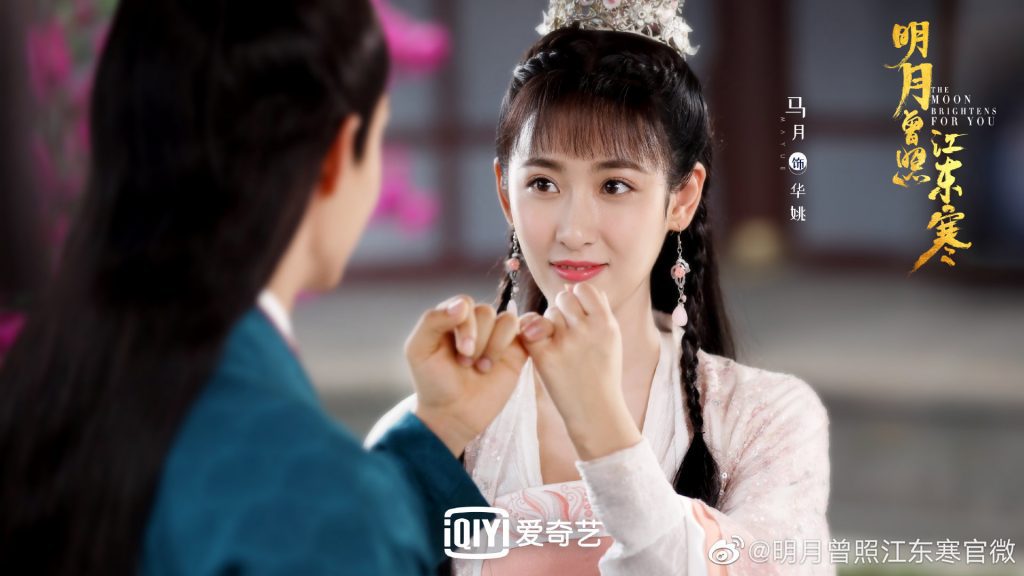 Hua Yao, played by Ma Yue, is a beautiful, cheerful and proud princess. Her whole life has been revolving around Wen You. This is no fault of hers, Wen You, after all, is betrothed to her. When all said and done, she was only looking out for her fiancé.

I pity this character the most in the entire drama. Sure she is willful, and even mischievous at times. But when she found out the man she has placed all her feelings, thoughts and efforts to, who has been promised to be married to her no less, has fallen in love with someone else, that must have been gut wrenching.

Even after their marriage, Wen You seems to still harbor some feelings to Qing Hong and even reminisce about her from time to time. There is no crueler treatment for any bride.

Later on, when she seemed to have attained a little bit of happiness, she lost Wen You and subsequently lost her life giving birth to their child. Poor Hua Yao cannot catch a break (╥﹏╥).

Interesting Characters To Spice Up the Show

It was certainly a delight seeing Sizhui all grown up….*cough*cough*….I mean Zheng Fan Xing as Qiu An. He breathes joy on to the scene with his playfulness and joyful attitude.

Even better when he grew up to be a more responsible leader as he matured later on in the series.

Another character who’s very entertaining is the odd ball Feng Bu Fei, played by Yan Su. From his name, we should have some sort of insight that this fellow might be eccentric, if not completely out of his mind. How did he even thought of making Lin Fang as part as his ‘collection’ to admire his beauty. Uughhh ….chills…. I’d imagine he will ask Lin Fang to put some lotion on his skin from time to time （ つ﹏╰）

I have to say though, Yan Su looks much older than he actually is in this get up. 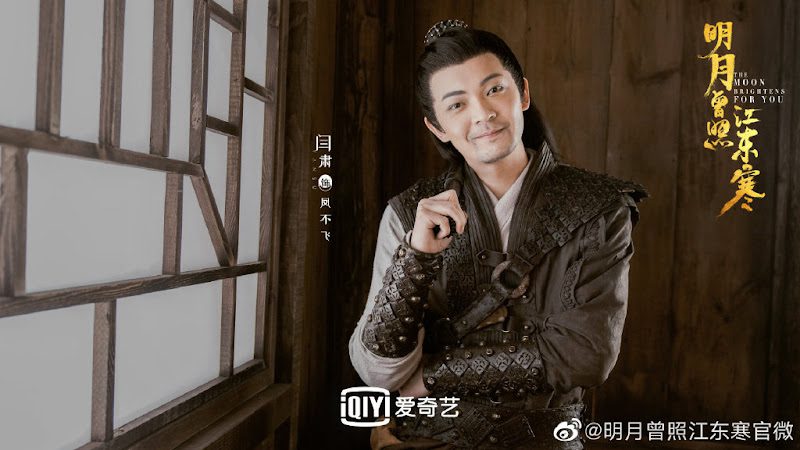 One side couple who did not have a tragic ending is Wen Rou and General Xia Hou Ying. This side couple truly has the cutest development in the entire drama. So precious＼(｀0´)／. The way shy and quiet Wen Rou chases after the equally shy and even more introverted General Xia Hou was hysterical to watch. 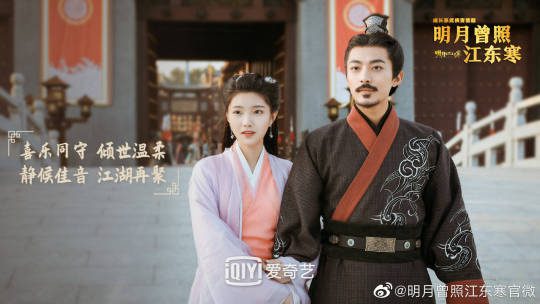 This The Moon Brightens For You drama with its many charms, has me revisit favorite scenes from time to time. Definitely a hidden gem, worthy of my time. I hope you like the review that I wrote. See you on another review, thank you.

"The plot is engaging, the fighting scenes are thrilling and stories surrounding the characters are exciting to follow."The Moon Brightens For You Drama Review